PARKINSON’S DISEASE PATIENTS WELFARE SOCIETY KOLKATA , works as a support group for People with Parkinson’s and their caregivers in Kolkata, capital of West Bengal in Eastern zone of India since 2014 as an independent body under president ship of DR.HRISHIKESH KUMAR, an eminent Neurologist with specialization in Movement Disorder, Vice-Chairman and Director of Research wing of INSTITUTE OF NEUROSCIENCES KOLKATA.

The PDPWSK has organized a painting exhibition of our member,a legendary Artist of International repute and PD warrior, Mr. Dwijen Gupta, who is now wheel chair bound due to the disease at THE BENGAL GALLERY AT ICCR, HO-CHIMINH SARANI,KOLKATA.

We are honored to have PROF.(DR) ROBIN SENGUPTA OBE, Chairman of Institute of Neurosciences Kolkata as the chief guest.

PROF.(DR) BIVU KALYANI DAS , our patron and DR.HRISHIKESH KUMAR, our PRESIDENT as distinguished guest of the evening.

The program started with the lighten up of the ceremonial lamp by Honorable chief guest and distinguished guests along with the artist Mr.Dwijen Gupta and other patient members of the society followed by felicitation of the Artist and other guests .There was a huge gathering and media attention.

This exhibition was followed by a colorful cultural program of songs and dance to commemorate celebration of 200 years of Parkinson ’s disease where participants are people with Parkinson’s Disease. It was a joint effort of PDPWSK, INK and MDSI. The dance recitals are choreographed by the eminent danseuse Smt. Alokananda Roy and young movement dance therapists Ms. Subhalihala, Ms Noel, Ms Snehashree and Mr. Ayan.

The songs were rendered by our choir group comprises of patients, caregivers and doctors and highly appreciated by acclaimed audience.
The best part was that we had full cheerful audience which highly motivated our patients. 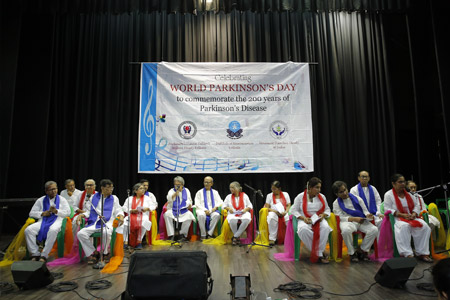 Our members & PD warriors were ready for their performance. 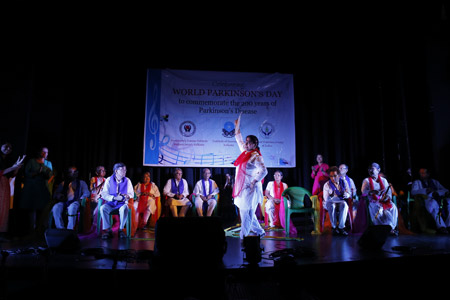 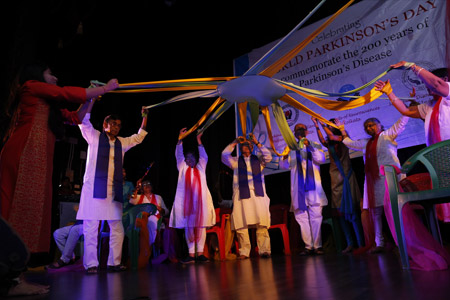 A powerful performance by our members 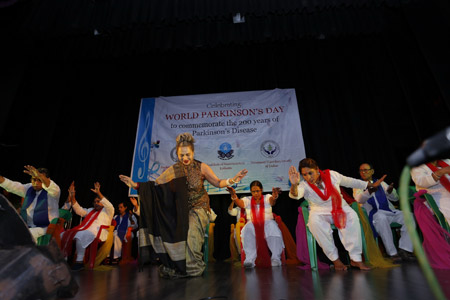